Britain’s favourite wild animal - the Hedgehog is in trouble - and they need your help!

Anne Brummer, founder of Surrey based Harper Asprey Wildlife Rescue in Windlesham  has collaborated with Channel 5 television for two one hour documentaries highlighting the plight of Britain’s hedgehog population and calling on the public for their help. Featuring  Queen legend Dr Brian May and wildlife adventurer Steve Backshall, the programmes will be broadcast on Channel 5 Wednesday 8th May 2019 and Wednesday 15th May 2019 as part of Hedgehog Awareness Week May 5th - 11th 2019.

Spike’s Hedgehog Food has announced a partnership with Amazing Grace, an initiative led by Dr Brian May’s charity, the Save Me Trust.

Amazing Grace, a collaboration between the Save Me Trust, Harper Asprey Wildlife Rescue and the British Hedgehog Preservation Society, is fighting the declining population of hedgehogs in the UK, and, as of 1st April 2019, 10p from every bag of Spike’s food sold will be donated to the campaign.

"Meet the Hedgehogs" TV Documentary  Tuesday 20th June 2017 8pm on Channel 5 Everyone loves hedgehogs! Brian May, Guitar legend and founder of the supergroup Queen, will be appearing

Saving Britain’s hedgehogs - one village at a time When was the last time you saw a hedgehog? It seems for more and more of us the answer is ‘years ago’, before we recall hearing them ‘snuffling’ around our gardens in search of food and water.

Grace is a rescue hedgehog from Harper Asprey Wildlife Rescue who has inspired a ‘rock star’ to help save Britain’s hedgehogs.

Windlesham - The ‘Hedgehog Friendly” Village The Surrey village of Windlesham was originally a farming outset of the Great Windsor Park. The village took its name from the River Windle running to the south of the village and the old english word, ham, meaning homestead.

Read all about it!

Please contact us on This email address is being protected from spambots. You need JavaScript enabled to view it.  or call on 01344 623106 for more information or click to see more here

Saving Britain's Hedgehogs: Steve Backshall's 5 Ways To Save A ...

https://www.housebeautiful.com/.../saving-britains-hedgehogs-steve-backshall-brian-...
8 May 2019 - With an estimated 1.5 million hedgehogs across England, Scotland and Wales collectively, and with those in rural populations declining more rapidly than urban ones, there's a real danger that hedgehogs will be extinct by 2025. In Channel 5's Saving Britain’s Hedgehogs, Steve ...

https://metro.co.uk › Entertainment › TV
8 May 2019 - Brian May was hailed a ‘hedgehog warrior’ after housing hundreds of the spiky animals in his garden. Yes, the Queen guitarist has set up a huge rescue centre called Amazing Grace, on his estate in Surrey, where a number of poorly hogs go to be rehabilitated and released back into ...

https://www.whatsontv.co.uk/events/saving-britains-hedgehogs-channel-5-8-may/
8 May 2019 - The hedgehog was recently voted Britain's favourite wild animal, but in Saving Britain's Hedgehogs we discover that their numbers are ...

Saving Britain's Hedgehogs - what time is it on TV? Episode 1 Series 1 ...

https://www.radiotimes.com/tv.../e/.../saving-britains-hedgehogs--series-1-episode-1/
8 May 2019 - Find out when Saving Britain's Hedgehogs is on TV, including Series 1-Episode 1. Episode guide, trailer, review, preview, cast list and where to ...

Saving Britain's Hedgehogs - what time is it on TV? Episode 2 Series 1 ...

https://www.radiotimes.com/.../saving-britains-hedgehogs--s1-e2-saving-britains-hedg...
Find out when Saving Britain's Hedgehogs is on TV, including Series 1-Episode 2. Episode guide, trailer, review, preview, cast list and where to stream it on ...

Brian May saving hedgehogs from being roasted on Bonfire Night ...

https://www.eagleradio.co.uk/news/local-news/2275413/surrey-heath-village-set-to-become-first-hedgehog-friendly-village/
9 Jun 2018 - Surrey Heath to become Britain's first hedgehog friendly borough ... Their campaign '#AmazingGrace' comes as the population of hedgehogs has ... Brian May from the Save Me Trust explains how important it is to save these ...

https://trending-uk.com/hashtag/Hedgehog.html
Brian May and lil bebe hedgehog https://t.co/c1zH0qzQgx .... #AmazingGrace. Team Grace along with Grace The Hedgehog on tour across Surrey Heath ...

www.windleshamsociety.co.uk/
Windlesham is a village in the Surrey Heath borough of Surrey and its name ... Brian May, along with The Harper Asprey Wildlife Rescue , Amazing Grace and film ... They were filming a second programme on the Meet The Hedgehog series,  ...

https://www.gracethehedgehog.co.uk/hedgehog-friendly-districts/bagshot-lightwater
For those who would like to do more an Amazing Grace Hedgehog Officer is ... to win a framed hedgehog print signed by Queen legend Brian May in the raffle.

https://secretsurrey.org.uk/2018/08/
Many people are aware of the crash in hedgehog numbers and there is still ... to find as the Amazing Grace has the very public support of Queen's Dr Brian May. .... National Heath Week and for everybody in the western part of Surrey, land of ...

https://www.getsurrey.co.uk/news/surrey-news/brian-downton-abbeys-peter-egan-14504551
15 Jun 2018 - Surrey Heath to become the first 'hedgehog friendly' borough in the UK .... Brian May, said: “It is shocking that Hedgehogs could face extinction in the UK. ... Amazing Grace had already made Windlesham the first hedgehog ...

https://www.independent.co.uk/environment/hedgehogs-official-protection-queen-brian-may-campaign-extinction-a8339311.html
6 May 2018 - Brian May says hedgehogs deserve to be protected officially ( Getty ) ... An initiative called Amazing Grace is urging wildlife lovers not only to ...

https://www.gracethehedgehog.co.uk/
Amazing Grace the Hedgehog Halting the decline one village at a time #AmazingGrace.
You've visited this page many times. Last visit: 14/05/19

https://www.gracethehedgehog.co.uk/.../308-saving-britain-s-hedgehogs-surrey-wildli...
8 May 2019 - Addressing our nation's dramatically declining hedgehog population, Anne set up the Amazing Grace Project to save Britain's hogs one town ...

Charity Harper Asprey and Brian May on how you can help with ...

https://www.getsurrey.co.uk › News › Surrey News › Windlesham
8 May 2019 - Charity Harper Asprey and Brian May on how you can help with 'Saving Britain's Hedgehogs'. Harper Asprey Wildlife Rescue says it isn't too ...

https://www.sky.com/watch/title/series/.../saving-britain...hedgehogs.../episode-1
Nature series with Steve Backshall, Brian May and the staff of Amazing Grace Rescue Centre. Steve gives 24 hog babies a second chance with a special ...

https://www.independent.co.uk/.../hedgehogs-official-protection-queen-brian-may-ca...
6 May 2018 - At the start of “hedgehog awareness week”, campaigners are calling on ... British Hedgehog Preservation Society and Dr May's Save Me trust.

Saving Britain's hedgehogs with Steve Backshall and Dr Brian May ...

https://www.stevebackshall.com/.../saving-britains-hedgehogs-with-steve-backshall-an...
3 days ago - This month on Channel 5, Steve Backshall, Brian May and the Amazing Grace Rescue Centre help healed hogs back into the wild. Tagged: ...

Kent Online | 21 Sept 2017
Queen legend Brian May spoke to youngsters about his fight to save the UK's hedgehogs during a visit to an infant school today.

Meet the Hedgehogs - What's on TV

What's On TV | 20 June 2017
Everyone loves a hedgehog – especially rocker and wildlife nut Brian May. 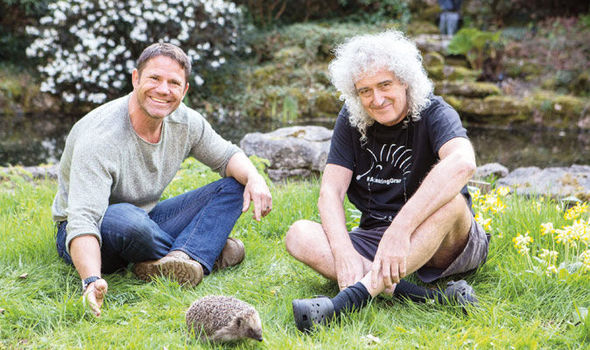 He may be a rock god, but Queen guitarist Brian May is also an animal campaigner of note. Already famous for fighting against fox hunting and the government’s badger cull, last year Brian set up a hedgehog charity, Amazing Grace, in Windlesham, Surrey.

The reason? Hedgehogs are in catastrophic decline in the UK. Sixty years ago it was estimated that 30 million hedgehogs called the UK home; now only about a million remain. Loss of habitat as a result of overdevelopment, the use of insecticides that kill their food, a penchant for fenced-off lawns that prevent them roaming, and collisions with cars and lawn strimmers are mostly to blame.

“All kinds of people in the public eye talk a lot about the extinction of tigers,” muses Brian, 69. “The hedgehog in our own country is declining at roughly the same rate the tiger is, so you have to think we should really be dealing with what’s on our doorstep first.”

Rock god to hedgehog hero is an unlikely trajectory… “I’m not a hero. I just do what I can,” demurs Brian.

“If I hadn’t met Anne, none of this would have happened. I had the will in my life, I always felt for animals, but I didn’t have any skills and I didn’t have any knowledge. Because I’m well-known, I’m able to have an effect out there, and so it’s good to use notoriety to good effect.”

Brian sprinkles stardust on this week’s Channel 5 documentary Meet The Hedgehogs, presented by Steve Backshall, which highlights the charity’s work, reveals what we can do to make our gardens hedgehog friendly, and generally celebrates the UK’s only spiky mammal.

Anne and her team at Harper Asprey rescue about 750 hedgehogs every year and provide round-the-clock care in nursing them back to health. But Steve also meets private individuals who’ve dedicated their lives to helping the little creatures. Since 1980, Elaine Drewery, an OAP from Authorpe, Lincolnshire, has turned her house into a hedgehog sanctuary, funding their care with her pension and donations.

Many of the hedgehogs under Elaine’s care have had excruciating encounters with garden strimmers. “Their spines are no match for strimmers, which can cause fatal injuries,” explains Steve. “To avoid casualties, check for wildlife first.”

“It was also common to spot a hedgehog in your garden years ago, but now it’s thought nearly half of us have never seen one on our lawn. But encouraging them to come is easier than you think.”

Helping them keep hydrated is an important first step, says Brian. “So many of the hedgehogs that come in [to the centre] are dehydrated, so if you’re going to put something out for them, put out a dish of water,” he says. Also, provide food such as cat food, dog food, nuts or raisins, but not milk or cheese – hedgehogs are lactose intolerant.

Steve asks us to remember that hedgehogs are nature’s gardeners, feeding on anything we might regard as pests. “So anything you put into your garden targeting those pests, such as chemicals and pesticides, will end up targeting hedgehogs.”

Other hedgehog-friendly tips include cutting a hedgehog-sized hole in the bottom of your garden fence, providing them freedom to roam, because hedgehogs can cover several kilometres per day in their search for food.

Steve is hopeful that ordinary Brits can help prevent the extinction of a species that, last year, topped a poll by the Royal Society of Biology as Brits’ favourite mammal.

“All hedgehogs are precious,” explains Steve. “They’ve been around longer than the sabre-toothed tiger or woolly mammoths, so they’re tough little creatures that deserve to be here for many years to come.”

MEET THE HEDGEHOGS, Next week, Channel 5

Radio Times | Jane Rackham
Our hedgehog population has declined dramatically. They were once a common sight in our gardens but some of us have never seen one in the wild. Steve Backshall meets people who are helping them survive...

Queen Official Site | 4 May 2016
Dr Brian May's Save Me Trust and Harper Asprey Wildlife Rescue are launching a new campaign #AmazingGrace aimed at...

Windsor Express | 3 May 2017
A visit from a popular TV presenter, a two-time Olympic rowing gold medallist and some prickly guests spiced up the build-up to a parish council meeting last night.

Your Local Guardian | 30 April 2017
Dr Brian May's hedgehog week kicked off yesterday with a meet and greet that was popular with residents.

Michael Gove on Twitter: "Delighted to meet up with the ...

Get Surrey | 19 April 2017
Queen legend Brian May is once again backing Britain's hedgehogs ahead of Hedgehog Awareness Week.

We are the Champions...For Hedgehogs: Queen legend comes to the rescue of iconic creature

Express | 26 April 2016
QUEEN legend Brian May is becoming king of the hedgehogs to stop the much-loved creatures from vanishing into oblivion.

Brian May launches #AmazingGrace campaign to save Britain's Hedgehogs